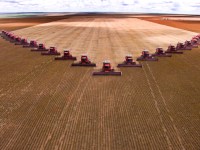 Source: thinkstock.com
Earlier this year, the International Energy Administration (IEA) and Bank of America both said that the United States has become the world’s largest oil producer, passing Saudi Arabia and Russia. American oil production growth and a rallying dollar have not only increased oil supplies, but have also led to dramatic price drops.

In addition to oil, the United States is also among the world’s largest producers of corn, soybeans, cotton, and wheat. However, the prices of these commodities — which are all traded on the futures market — have dropped noticeably in the last year.

Click here to see the seven commodities with collapsing prices

For some commodities, the drop in prices has been tied to increased supplies. Notably, for many crops, increases in production have created a supply glut, which has lead to cheaper prices. This has been the case with a number of major crops, including commodities, soybeans, and corn, all of which had among the largest price declines out of the commodities we reviewed. The fall in these prices is also likely tied to high levels of domestic production.

The prices of a number of precious metals have also dropped this year. These include platinum and silver, both of which have dropped at least in part due to a stronger U.S. dollar, according to research from BMO Capital Markets. As the buying power of the dollar increases, the dollar denominated price of many commodities often drops. This is because it becomes more expensive for foreign buyers to purchase commodities priced largely in dollars, such as oil.

In order to determine the commodities with the largest price decline, 24/7 Wall St. reviewed futures contract data published by Quandl, an online data provider. Data used here is from the Stevens Continuous Futures database. This database adjusts price in order to account for contract “roll,” when one futures contract expires and another becomes the “front contract” — the shortest-term futures contract available in the market. Commodities that are traded outside the U.S., or are petroleum byproducts, such as gasoline and heating oil, were excluded from our consideration.