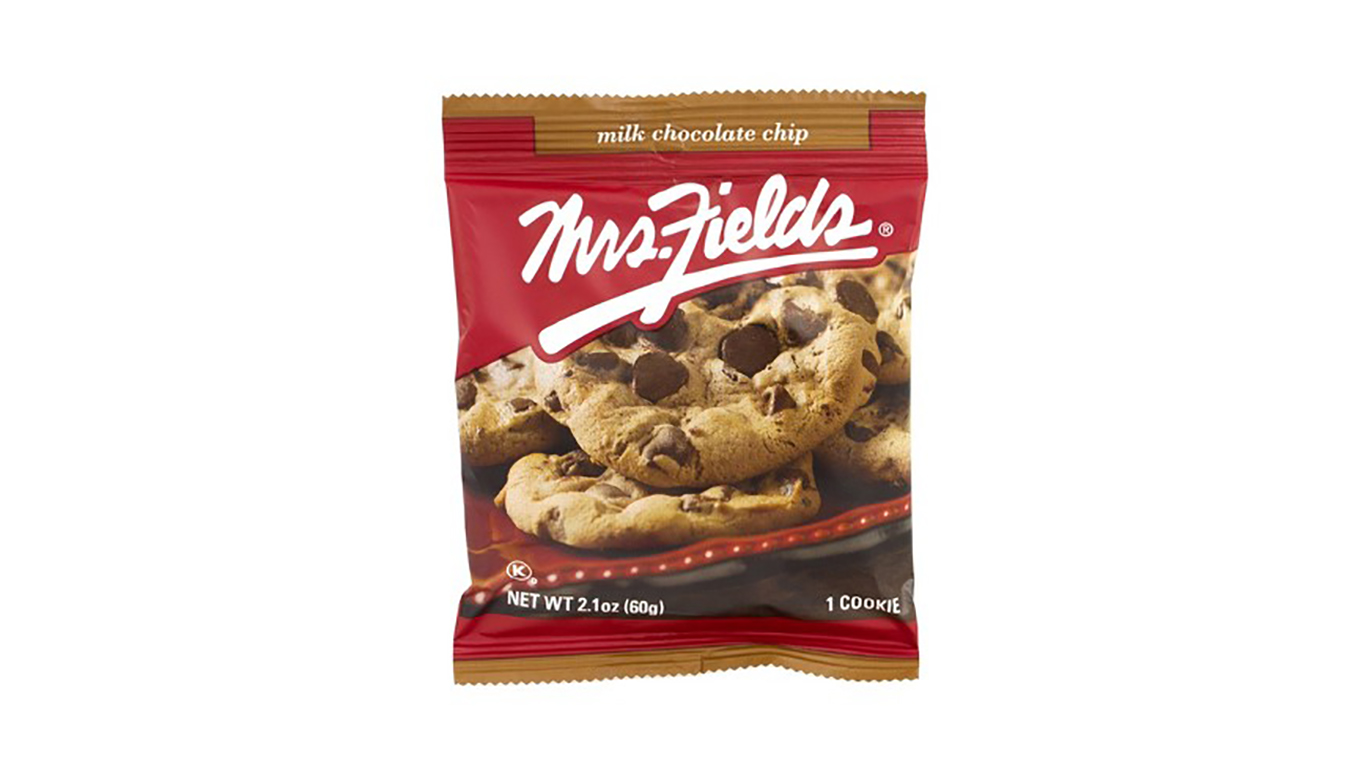 Debbi Fields was a young Northern California housewife who, after a year or so of marriage, decided to start a business based around the chocolate chip cookies she had been baking since the age of 13. Fields had gradually adapted the original 1930s-vintage Toll House chocolate chip cookie recipe, and her version was big and soft. Market research had suggested that customers preferred crisp cookies, and her friends and relatives didn’t believe her cookies would do well. Nonetheless, she and her economist husband found a banker who was willing to give them a business loan, and in 1977, when she was only 20, she opened Mrs. Fields’ Chocolate Chippery in Palo Alto’s Liddicoat’s Market. Failing to sell any cookies, she took samples out into the street. Once people had tasted them, they came to buy the cookies.

By early 1981, there were 14 Mrs. Fields’ stores in several states; by 1983, there were 70. The chain continued to grow, but over-expansion and the economic downturn of the 1990s affected the chain, and the Fieldses increasingly lost control of their company. The couple divorced in the late 1990s, and in 2000, the company was sold to Famous Brands International, an arm of investment firm Z Capital Partners (Famous Brands also owns the TCBY frozen yogurt chain). Debbi Fields remains a spokesperson for the company, which currently has more than 300 retail outlets in the U.S. and internationally. 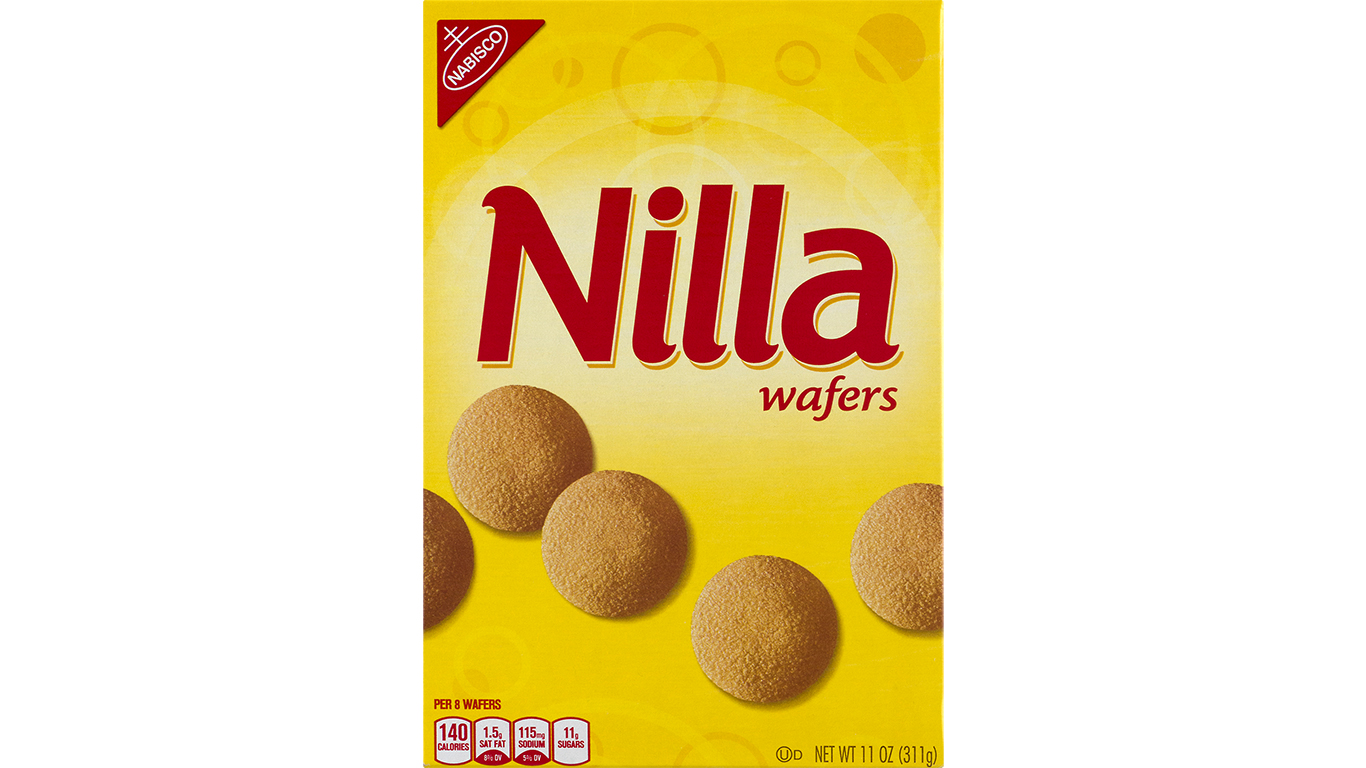 Though vanilla wafers were being sold in the New York area as early as 1871, the original recipe for what evolved into Nilla Wafers is said to have been devised in the late 19th century by a Staten Island confectioner named Gustav A. Mayer, who sold the formula to Nabisco. That company began marketing them in 1898, calling them simply Vanilla Wafers. They were rebranded under the Nilla name only in 1967. In the 1920s, home cooks started using the wafers to make a kind of bottom crust for banana pudding, and in the 1940s, Nabisco began publishing a recipe for the dessert on its vanilla wafer boxes. It became particularly popular in the American South, and today, banana pudding made with Nilla Wafers is considered a Southern culinary icon. 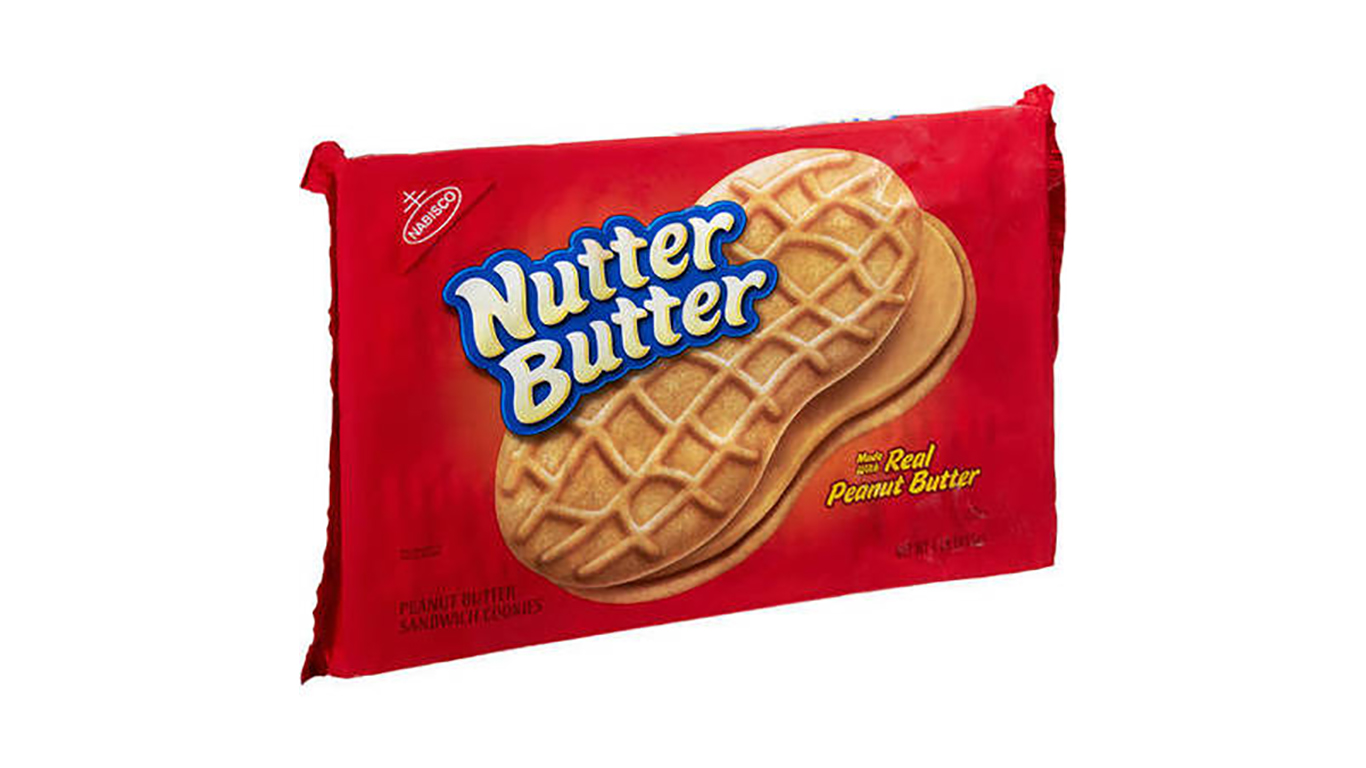 Nutter Butter wafers are another cookie concoction developed by Nabisco. Consisting of two sugar wafers shaped more or less like peanuts in their shell, sandwiching a “real peanut butter” filling. The company styles them, on the package, “The peanut butter lovers’ cookie.” Cookie trivia: The waffle pattern on the wafers was designed by William Turnier, who worked in Nabisco’s engineering department — the same man who redesigned the surfaces of Oreos (See No. 20) 40 years after their debut and tweaked the appearance of both Ritz Crackers and Milk-Bones. 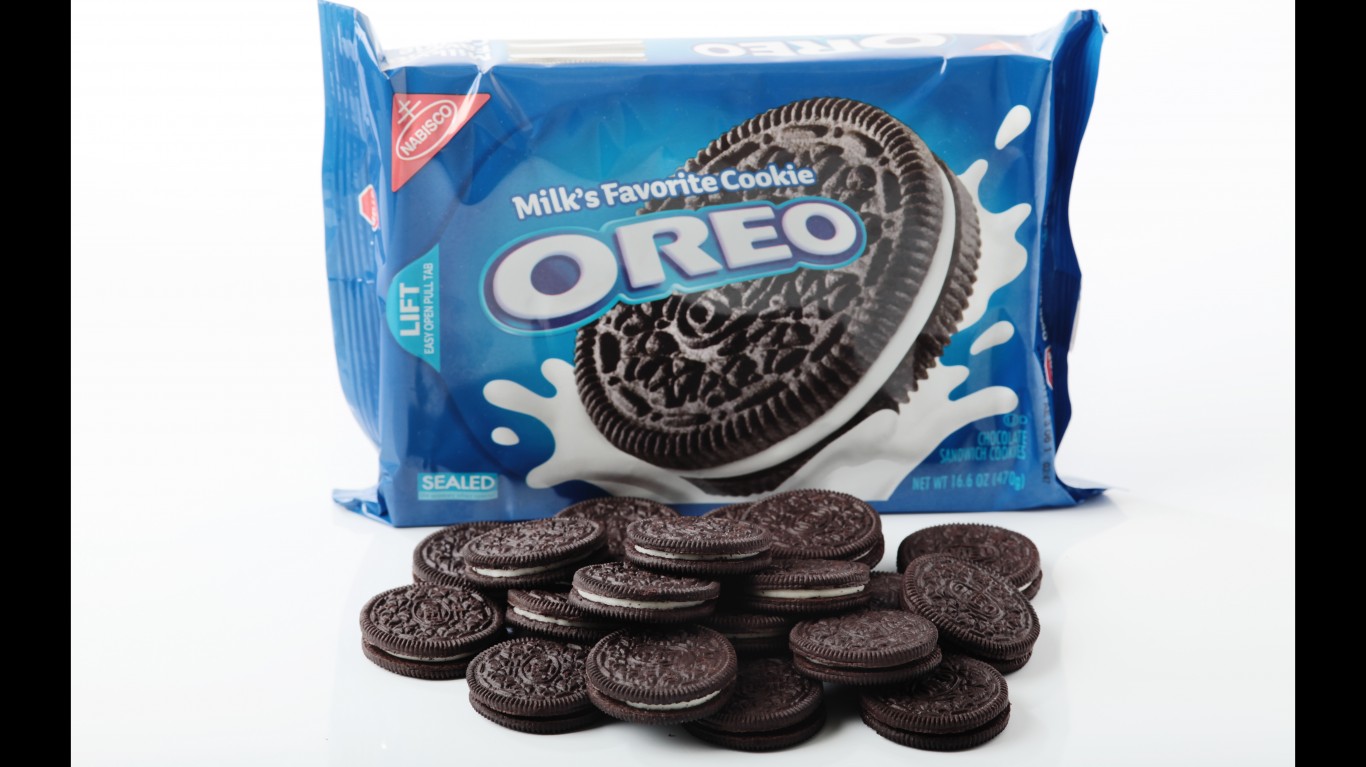 The world’s best-selling cookie, Oreos sales top $2 billion annually worldwide. More than 40 billion of them are produced each year in — countless seasonal, promotional, and regional varieties — in some 18 countries. (Oreos’ biggest market, after the U.S., is China.) Oreos were first made in Nabisco’s Manhattan factory and initially sold in bulk tins, by weight (a grocer in Hoboken, New Jersey, was the first customer). The origin of the name is uncertain, but it may derive from the Spanish word for gold, “oro” as early packaging had gold lettering, or perhaps from the Greek word for mountain, “óros” because the first Oreos were reportedly mound-shaped.

Oreos weren’t the original cookie of their kind. The Sunshine Biscuit Company created a confection that looked almost exactly like Oreos in 1908, called Hydrox, four years before the first Oreo was made — but Nabisco’s superior marketing apparatus turned its version into a smash hit, while Hydrox gradually faded from the scene. (Sunshine was bought by Keebler in 1996 and is now part of the Kellogg’s empire. Leaf Brands, a California-based retro candy company, now produces Hydrox cookies again.) 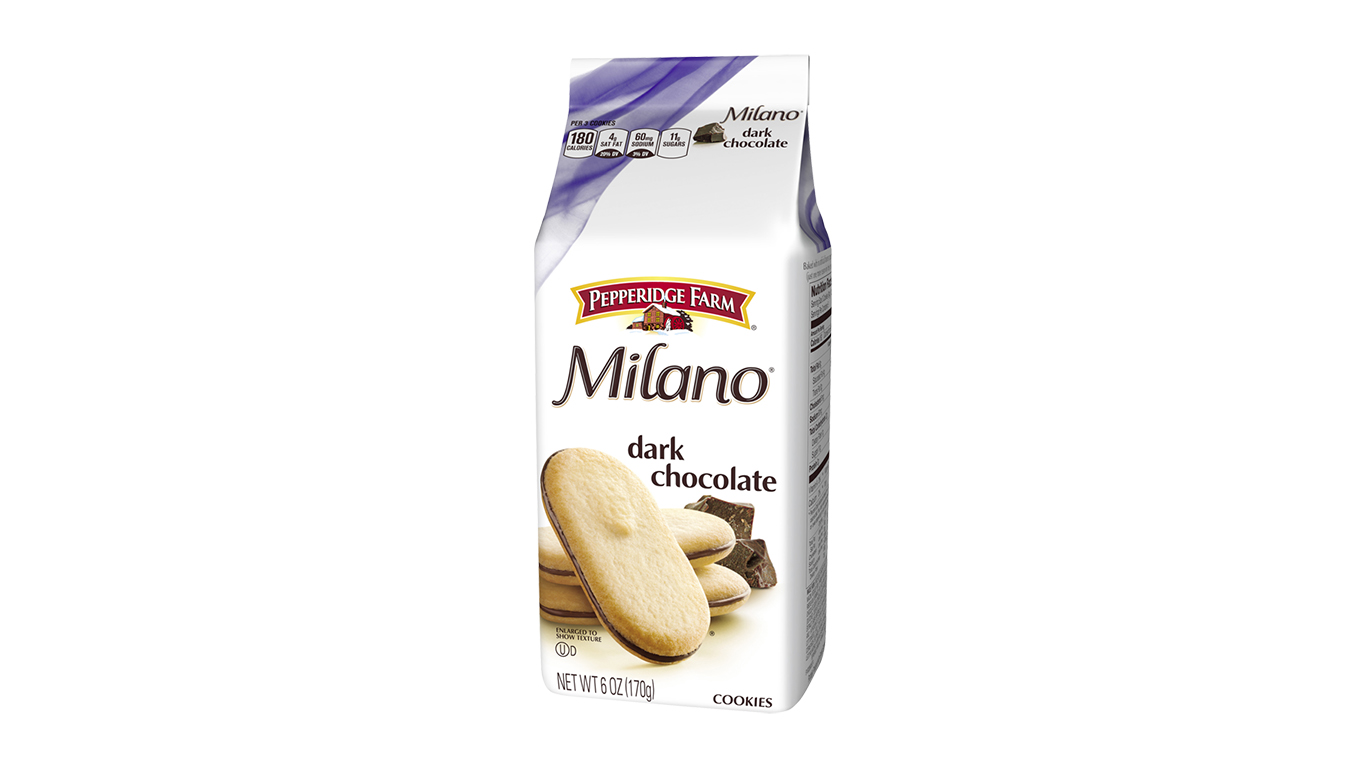 There really was a Pepperidge Farm, a property in Fairfield, Connecticut. There, during the Depression, housewife Margaret Rudkin started baking whole grain bread for an ailing son. The bread turned out so well that she began selling it, first locally, then in New York City. The enterprise grew, and on a trip to Europe, the Rudkins discovered a line of fancy chocolate cookies being produced in Belgium by N.V. Biscuit Delacre. Thinking they could be popular in America, Rudkin bought the rights. One of the varieties evolved into the Milano — a sandwich of chocolate cream (dark, milk, and mint-flavored versions are available) enclosed in sugar cookies of the type the French call “langue de chat,” or cat’s tongue, for their shape. (Pepperidge Farm has been owned by the Campbell Soup Company since 1961.)