In a future release of iOS, Apple Inc. (NASDAQ: AAPL) plans to include a feature that will allow people to prove that they have received the COVID-19 vaccination. No release date has been given.

Someone’s vaccination record would be stored in Apple’s Health app, and the verifiable record would be available using QR codes, downloadable files or through health care providers using Health Records on iPhone.

Apple is promising strict privacy and will have no access to imported or shared records. All info will have to be encrypted, and Apple will not be able to view someone’s card or see how the card has been used.

According to Engadget, the feature will use an international standard known as SMART Health Cards to display a vaccination record, sign it with a private key and create a public key to verify the information.

Researchers at eMarketer expect streaming service Spotify to wrestle the lead in monthly U.S. podcast listeners away from Apple by the end of this year. Sweden-based Spotify is expected to have 28.2 million monthly podcast listeners to Apple’s 28 million, and that lead is forecast to widen in the future.

eMarketer noted that 40% of U.S. internet users will tune into at least one podcast this year. Given the rapid listenership growth, the firm expects growth to slow over the next few years. Slower growth does not mean no growth, however, and eMarketer expects Spotify to increase its podcast audience through 2025. 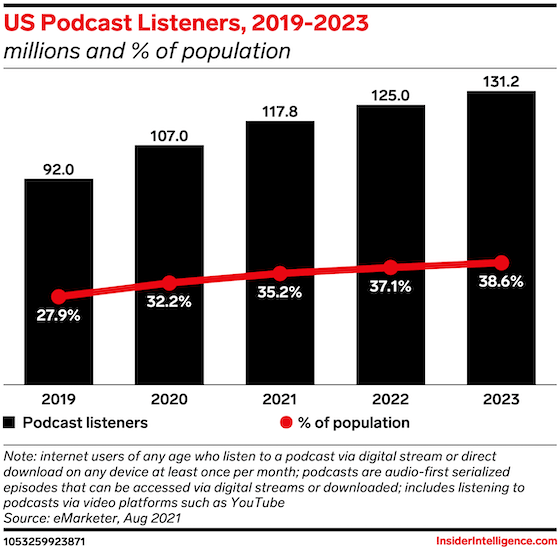 Speaking of podcasts, Apple has a new Marvel podcast channel courtesy of Marvel and Sirius XM. The new channel is free and includes a paid tier that includes early, exclusive access to some shows.

According to a report at Engadget, the paid tier features new scripted and unscripted series and a documentary series, Marvel’s Declassified, about the history of Marvel Comics.

The Marvel channel is available in more than 170 countries and the paid tier, Marvel Podcasts Unlimited, costs $4 a month in the United States, although pricing may vary. There’s a seven-day free trial period as well.

Initial reports indicate that Chinese consumers have preordered more than 5 million new iPhone 13 models since Apple began taking orders for the new phones. Shipments had been expected to begin on Friday, but that has now been pushed out until the second week of October.