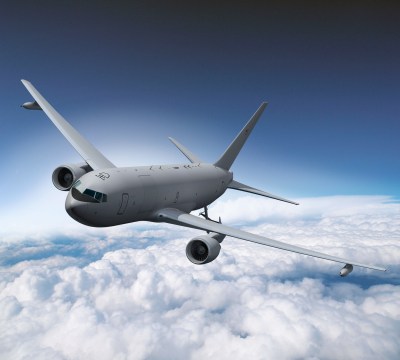 Source: The Boeing Co.
In 2011 the U.S. Air Force awarded a contract to Boeing Co. (NYSE: BA) for 179 new KC-46 refueling tankers to replace about a third of the Air Force’s current fleet KC-135 Stratotankers, which first entered service in 1957. Now Boeing will compete with Airbus and Israel Aerospace Industries to sell four new tankers to South Korea.

Boeing’s KC-46 is based on the company’s twin-engine, wide-body 767-200ER commercial passenger plane family — the 767-2C — which is a freighter version of the base aircraft similar to but not identical with the commercial freighter version, the 767-300F. The basic plane can be configured either as a tanker, an air medical evacuation plane or a cargo and passenger transport.

The Government Accountability Office (GAO) issued a progress report in April on the KC-46 program and actually lowered the total cost from $51.7 billion to $51.4 billion. At that price, the U.S. Air Force is paying $287 million per plane, and that does not include a parts and maintenance contract. Adding in the value of the long-term parts and maintenance deal would about double the $51.4 billion value of the contract.

The contract with South Korea is worth about $1.38 billion, according to a report from Reuters. That works out to roughly $345 million per airplane. At that price, the contract almost certainly includes a parts and maintenance deal in addition to the planes.

The South Korean government is helping make up the difference that Boeing incurred for underbidding the contract. The company plans to eat about $200 million in development costs, which it plans to make up with higher volumes and parts sales.

Boeing expects to complete the first of four test aircraft in the third calendar quarter of 2014, and the first test flight is scheduled for the first quarter of 2015. The first delivery of a production plane to the Air Force is set for early 2016. All 179 planes are scheduled to be delivered by 2027.