Will Monster Beverage Implode on Energy Drinks After Earnings? 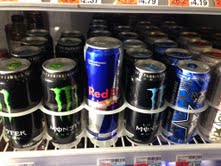 Source: JonOgg/NYC
Monster Beverage Corp. (NASDAQ: MNST) had been one of the great American beverage growth stories. With its earnings report on the heels of so much controversy about the safety of energy drinks, it is fair to wonder how strong the company’s future will be. The price of Monster stock indicates that more trouble lies ahead, despite its sales growth.

Monster’s first-quarter report showed that net income was down 17% to $63.5 million, or $0.37 in earnings per share. The company attributed that to legal expenses ($3 million) and distribution costs ($8.3 million), and even blamed an unfavorable impact from currency rates ($4.7 million). What is amazing is that revenue still managed to grow despite all the negative press and coverage surrounding the so-called energy drinks. Sales were up more than 6% from a year ago to $484.2 million.

What is interesting is that management is still talking about growth and new launches internationally. Despite all the bad press, Monster has maintained that its drinks are safe to consume. Maybe the bad press about safety does not matter elsewhere if growth is still expected. Analysts have projected sales growth of more than 10% for both 2013 and 2014.