The Speediest Smartphones in the US Come from South Korea

The data was in a report titled How the Smartphone Affects Mobile Network Experience by independent network monitoring firm OpenSignal which collects over 3 billion individual measurements every day from tens of millions of smartphones worldwide. The firm says it analyzes data recorded in the places where subscribers actually live, work and travel, and reports on mobile network service the way users truly experience it.

Internationally, Samsung device users experienced faster download speeds than users of either Apple or Huawei devices in 14 of 40 countries, double the number of countries where either Apple or Huawei devices posted the fastest speeds. Samsung smartphones won in the United States with a download speed advantage of 8.2 Mbps over second-place Apple. Apple devices biggest win came in the United Arab Emirates where they bested #2-ranked Samsung by 14.7 Mbps.

The reasons that different phones perform better or worse in different countries are technical and not easy to explain to consumers according to OpenSignal. Among these are a device’s ability to connect to more frequency bands (there are more than 40 4G bands in use around the world), the ability to connect to more than one band at the same time (carrier aggregation), higher radio frequency (RF) performance, and the device maker’s choice of a modem supplier.

At the high-end of the smartphone market (devices meeting an LTE standard of category 16 or higher), Samsung leads with a download speed of 26.6 Mbps, followed by Apple with 25.1 Mbps and Huawei with a speed of 24.4 Mbps. Apple’s mid-tier devices (LTE categories 5 through 15) post download speeds of 16.5 Mbps to lead in the mid-price device range followed by Huawei with a download speed of 16.3 Mbps and Samsung with a speed of 14.4 Mbps. At the low end of the smartphone market (LTE categories 4 and lower), Huawei devices lead with speeds of 12.1 Mbps followed by Samsung (9.7 Mbps) and Apple (8.9 Mbps).

The following chart shows Apple models from the iPhone 5S introduced in 2013 to the XS Max introduced last year, their 4G download speeds in the United States, and their LTE category level. Generally the higher the LTE category, the faster the network communications speed. 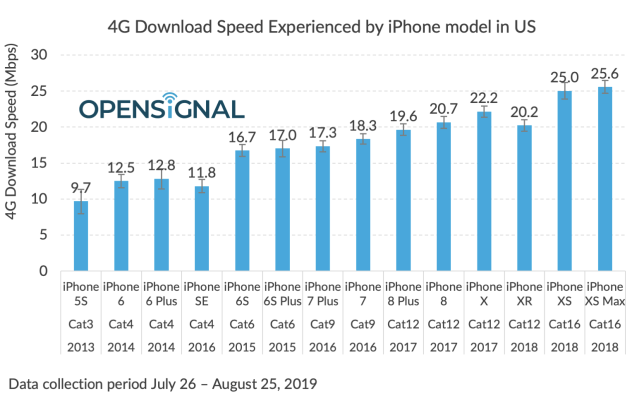 OpenSignal notes that only the Apple XS and XS Max (the data was collected before Tuesday’s announcement of the iPhone 11 and 11 Pro) meet LTE category 16 requirements (so-called gigabit-capable modems) while Samsung and Huawei have been shipping devices to meet that requirement for two years or more. A protracted dispute with Qualcomm caused Apple to focus on other smartphone features (facial recognition and longer battery life, for example). Now that Apple has settled with Qualcomm and acquired modem assets shed by Intel, OpenSignal expects Apple to turn out faster modems for its 5G devices and for future 4G devices.

24/7 Wall St.
The Speediest Smartphones in the US Come from South Korea
Get Our Free Investment Newsletter