Danish wind power giant Vestas Wind Systems has begun constructing a wind turbine tower with four rotors, according to an exclusive report in Windpower Monthly. A typical tower has just one turbine, attached at the top of the mast.

The rotors are refurbished 225kW Vestas rotors capable of generating 900kW of electricity at a single tower. Vestas hopes that the new design can help it overcome the rotor size-to-weight problem that limits how large a single rotor can be.

Vestas already has begun construction on the tower and plans to test and validate the design over a period of one year. The following concept drawing from Vestas shows what the new design looks like. 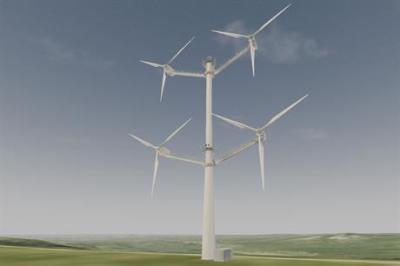 Multiple-rotor designs have been tried over the decades, but none ever reached a feasibility stage. Vestas technology chief Anders Vedel told Windpower Monthly:

Competition is getting stronger by the day, and wind power increasingly has to compete with other renewable energy sources as well. … This is a concept development project and, as such, it still has many technical, financial and economic challenges to address. But we would not do it if LCOE [levelized cost of electricity] and other benefits did not exist.

In the United States, the Energy Information Administration last year forecast the 2020 LCOE for onshore wind at $74 per MWh, more than $50 less than solar PV. Levelized costs are generally computed as the sum of costs over the design lifetime divided by the sum of electrical energy produced over that lifetime, but the formula may vary.