Source: Healthcare.gov
The Congressional Budget Office (CBO) is supposed to be mostly independent of politics in its forecast. That being said, some might agree and some might disagree about how independent their reports end up being. So, what is the public supposed to think when the Affordable Care Act (ACA) is still under attack and the CBO says that repealing it would increase federal budget deficits by $137 billion over the 2016 to 2025 period?

A fresh report from the CBO Joint Committee on Taxation analyzed the main budgetary and economic consequences if the ACA is repealed. The report shows that both groups considered the effects of a repeal on ACA holding gross domestic product (GDP) and other macroeconomic variables like interest rate assumptions constant.

When the groups include budgetary effects of the so-called macroeconomic feedback, they project that repealing the ACA would increase federal budget deficits by $137 billion over the 2016 to 2025 period. This figure considered the proposal’s impact on federal revenues and direct spending. This figure sounds massive on the surface, but think about what it means on an annualized basis now — and then look at how back-end loaded the figures are on the table below.

Excluding the effects of macroeconomic feedback showed that federal deficits would increase by $353 billion over the 2016 to 2025 period if the ACA was repealed. Still, this is what was said on output:

Repeal of the ACA would raise economic output, mainly by boosting the supply of labor; the resulting increase in GDP is projected to average about 0.7 percent over the 2021–2025 period. Alone, those effects would reduce federal deficits by $216 billion over the 2016–2025 period, CBO and JCT estimate, mostly because of increased federal revenues.

Additional caveats were included in the CBO data. These might make your head spin in some cases, but admittedly it is a hard job for anyone to predict a decade out. After all, usually there is one or two small recessions every 10 to 15 years. The report said:

Repealing the ACA would cause federal budget deficits to increase by growing amounts after 2025, whether or not the budgetary effects of macroeconomic feedback are included. That would occur because the net savings attributable to a repeal of the law’s insurance coverage provisions would grow more slowly than would the estimated costs of repealing the ACA’s other provisions—in particular, those provisions that reduce updates to Medicare’s payments. The estimated effects on deficits of repealing the ACA are so large in the decade after 2025 as to make it unlikely that a repeal would reduce deficits during that period, even after considering the great uncertainties involved.

Again, projecting real dollars and cents — or even sense — really depends on what views are being taken and what assumptions are made about the economy. Longer-term outlooks of a decade and more often fluctuate wildly throughout time and throughout the business cycle.

Lastly, let’s consider one thing about that $137 billion used for the period spread over 2016 to 2025 — or even consider the $353 billion cost without the macroeconomic feedback. Many politicians and citizens would say it would be worth it considering that these figures are relatively small on an annualized basis. They might really jump on that when they see the year-by-year breakdown below.

24/7 Wall St. went into the guts of the report to get a year-by-year breakdown on the estimated cost effects. While the figures vary wildly under the with and without feedback calculations, one thing is constant: the bulk of both calculations are in years 9 and 10, and both calculations show that repealing ACA would lower the deficits in the first three years. The table below spells out both calculations: 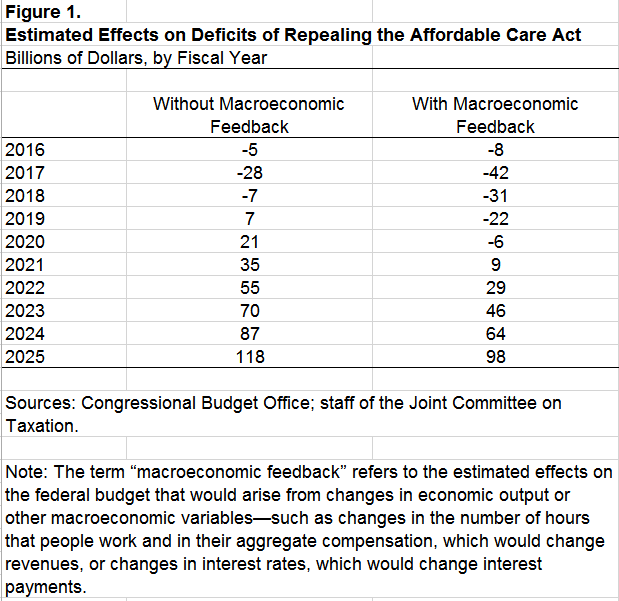