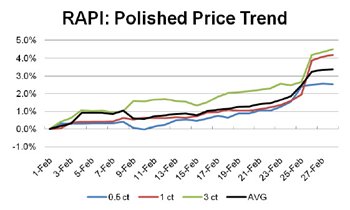 There is a prevailing belief that higher oil prices act as a tax on the poor and middle classes because everyone pays the same for gasoline and energy regardless of income.  If that is true, then an opposite would be to find goods that only the wealthy buy where prices are rising.  Diamonds fit just that bill.  Diamond prices have risen faster than most goods.

Investors in Tiffany & Co. (NYSE: TIF) and in Blue Nile Inc. (NASDAQ: NILE) have already had to consider rising gold prices.  So far the price gains have not been killed as the recovery for the rich has outweighed the pain of higher prices.  While there is more than 9% unemployment, the wealthy aren’t unemployed and they can buy diamonds and jewelry.

A fresh report from Rapaport, the leading source on diamond pricing that exists, shows just how much prices of diamonds are rising.  RapNet showed that average asking prices rose by 3.4% just over the month of February 2011:

It isn’t just the high-end that rose.  Maybe middle-class America will notice this as well.  RapNet showed that small inexpensive diamonds rose with average prices up 11.3% from the end of February-2010.

The prices were not attributed to gold, nor to rising commodities. It was due to rising demand. Strong Indian demand, constrained supply from diamond miners, demand in Belgium and Israel, and continued demand in China were all cited as causes for the rise in diamond prices.

De Beers Diamond Trading Company showed that prices rose by about 7% in February.  Prices at rough tenders increased by about 7% to 10%, and premiums in the secondary market “remain in the high single digits despite the price hikes and demand remains strong.”

There is a chance that recent events around the globe may curb the numbers soon.  RapNet’s report noted on the current risks, “geopolitical and macroeconomic factors may still have a negative impact on the market.”

It is one thing to hear everyone talking about the impact of $4.00 gasoline.  How sorry does the public feel when they hear millionaires complaining that their new ring should have cost only $12,000 rather than $14,000?