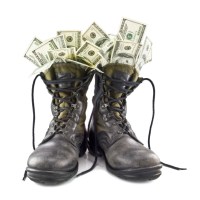 Global military spending totaled $1.78 trillion in 2014, down slightly from the year before. Military expenditures in North America, Western and European countries continued to slowly decline, while spending rose in Asia, the Middle East, and Eastern Europe. The United States still accounted for more than one-third of military spending worldwide.

The Stockholm International Peace Research Institute (SIPRI) measures annual military spending for most of the world’s armed countries. According to SIPRI, the United States spent $610 billion on its military last year, several times the $216.4 billion budget of second place China. Based on nominal military expenditure figures, these are the countries with the largest military budgets.

Click here to see the countries spending the most on war.

The United States stands out — far and away — as the world’s most dominant global superpower. While U.S. military spending has declined from its 2010 peak, spending remains at historically high levels. The expenditure is still far higher than it was during the Cold War, according to Perlo-Freeman, and still higher than in 2001 — just before 9/11.

Large economies allow for governments to raise high revenues through regular types of taxation of individuals and business. As Perlo-Freeman explained, high military expenditures often depend on “revenues from taxing the full range of economic activities within the country.”

A prosperous economy can also result in higher military expenditures. Compensation of personnel is often among the largest operational military costs, and as a population’s wealth grows, the government should ensure soldiers and officers are compensated accordingly. This partly accounts for the growing expenditures in China, where military spending has roughly mirrored the nation’s economic growth. “Otherwise,” Perlo-Freeman said, “you have discontented, low morale, low skilled people in your armed forces.”

In other countries, such as Saudi Arabia and to some extent Russia, oil revenues make up a significant portion of funding sources for the military. Saudi Arabia is able to maintain its substantial military spending without any of the taxes on which most other countries rely.

Perlo-Freeman suggested that the exceptionally high spending in the U.S. reflects a perception that there are “potentially military threats everywhere.” Other top countries for military expenditure have immediate conflicts on their borders. South Korea, Japan, India, and Saudi Arabia are all involved in relatively isolated regional disputes. Russia’s foray into Ukraine and subsequent annexation of Crimea had larger, international ramifications. These conflicts largely account for the high military spending in these countries.

To identify the countries spending the most on their military, 24/7 Wall St. reviewed total military expenditures in 2014 in more than 170 countries from SIPRI. We looked at expenditure data from each year since 2005. For the purpose of comparison, historical data are in inflation-adjusted 2011 dollars. We reviewed SIPRI data on military exports, imports, and military expenditure as a percentage of gross domestic product, as well as a percentage of government spending. We also looked at GDP and GDP growth figures from the International Monetary Fund (IMF). In addition, we reviewed 2013 military personnel figures from the World Bank.

These are the countries spending the most on the military.