About 420,000 of the New Orleans metropolitan area’s 1.2 million residents, or nearly 35%, are African Americans — the fifth-largest proportion among all metropolitan areas. Still, housing segregation in the Big Easy limits racial interaction. On average, 71% of the people a white person in New Orleans encounters on a daily basis are white, while 64% of the people a black person encounters are also black. More than 40% of New Orleans’ black residents live in neighborhoods that are at least 80% black. 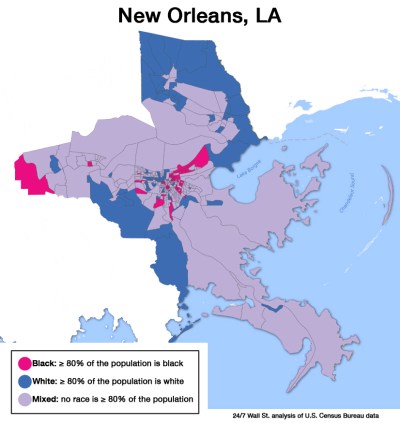 Evidence suggests that one of the lingering effects of Hurricane Katrina has been accelerated segregation in the city. Many homes were destroyed in the hurricane and hundreds
of thousands of residents were displaced. To help residents return to New Orleans, the city enacted policies and practices that according to critics assisted mostly white wealthy residents — and made life more difficult for mostly black poorer families. The city justified one such law, which limited renting to only close relatives, as fulfilling a “need to maintain the integrity and stability of established neighborhoods.”

The Birmingham campaign to end segregation in the city in the early 1960s was led by Fred L. Shuttlesworth and Martin Luther King, Jr. At the time, the events in the city were pivotal in leading to the Civil Rights Act of 1964. It is therefore ironic that this city, which is so closely associated with integration, remains one of the most segregated in the 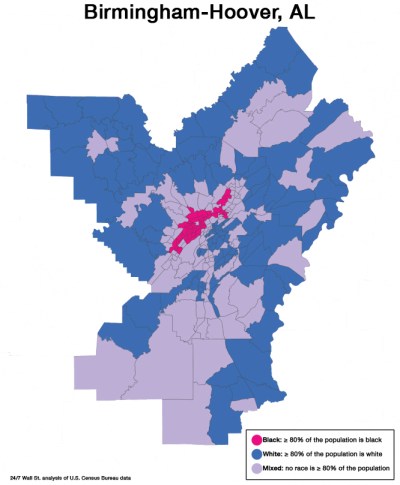 country. More than half of all Birmingham residents live in neighborhoods that are overwhelmingly of the same race, while just 31.2% of those living in large metropolitan areas
do.

Social and economic inequality along racial lines tends to be more common in more segregated cities. In Birmingham, 11.8% of white residents live in poverty, while 27.6% of black Birmingham residents do. Just 3.7% of Birmingham’s white workers are unemployed, roughly one-fourth the metropolitan area’s black unemployment rate of 14.5%.

After investigating the Baltimore City Police Department, the U.S. Department of Justice found that police in the area routinely violate the constitutional rights of residents and federal law. Baltimore police use enforcement strategies that encourage unconstitutional stops, searches and arrests that disproportionately affect African Americans, as well as excessive force, the DOJ found. In an essay following the DOJ report, Johns Hopkins University professor Lester Spence wrote, “In effect, the city is producing and reproducing a population that has no functional purpose other than to be policed.” 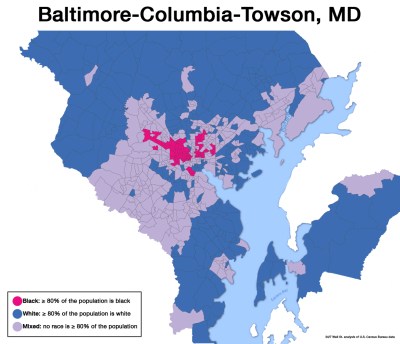