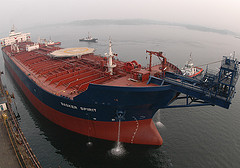 Teekay Offshore Partners LP (NYSE: TOO) is the latest among many companies seeking to raise capital.  The company has announced plans to sell some 5.6 million public units in a secondary offering on top of the approximately 45 million  units outstanding.

The company plans to use the proceeds to acquire new vessels, as well as for general corporate purposes.  Those acquisitions of vessels include vessels which Teekay Corp. (NYSE: TK) has offered or may offer for it to acquire. Teekay raised roughly $130 million in another secondary offering this year.

Read more: Transportation, TK, TOO, IPOs and Secondaries, Mergers and Acquisitions
Get Our Free Investment Newsletter