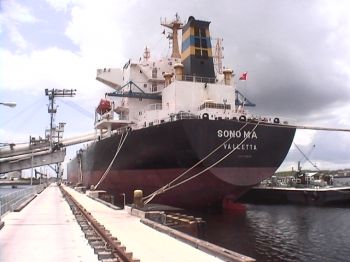 Earlier this month, Dryships Inc. (NASDAQ: DRYS) completed a private placement of shares worth a total of $500 million in its wholly-owned subsidiary Ocean Rig UDW Inc. The shares were newly-issued, unregistered shares priced at $17.50/share and amounted to about 20% of the Ocean Rig’s value. Dryships also plans to buy back up to $25 million of the Ocean Rig shares it just placed. On January 19th, Diana Containerships is expected to begin trading on the NASDAQ under the symbol ‘DCIX’.

Both Diana Shipping and Dryships are seeking a path out of the doldrums of dry bulk shipping, their main business. Dry bulk shipping rates have been soft all year, due primarily to an over-supply of ships. The Baltic Dry Index reached a 52-week low of around 1,700 in July, recovered to about 3,000 in September, and has fallen to below 1,900 again. For comparison, in May 2008, the Baltic Dry Index set an all-time high over 11,000. By December of that year, the index posted a low of 660.

In late November, analysts at Goldman Sachs said that the size of the dry bulk fleet would increase by 11% in 2011, while demand would increase by just 8.4%, according to report by Bloomberg. Dryships and Genco Shipping and Trading Ltd. (NYSE: GNK) were rated as ‘neutral’, and Diana Shipping was rated as a ‘buy’.

Diana Shipping and Dryships appeart to be following the same basic strategy — follow the money. And the money is in deepwater drilling and container shipping. Dryships already has two drilling ships at work and four more on order. Diana Shipping is raising capital for Diana Containerships without resorting to borrowing and further reducing Shipping’s exposure to the uncertainties of the container shipping markets.

In a separate deal, the Seattle-based shipping maintenance and repair outfit called Todd Shipyards Corp. (NYSE: TOD) has agreed to be acquired in a $130 million buyout valued at some $22.27 per share by Vigor Industrial LLC.

Dryships’ shares and Diana Shipping’s shares have so far hardly seen much action on the news.  Todd’s shares are up only about 7% at $22.45 after having been above $23.00 at the open.