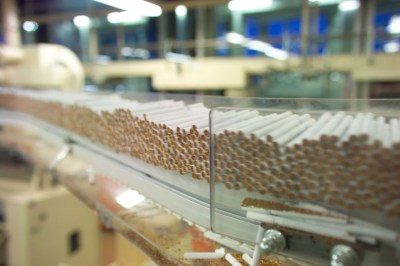 Its net revenues (outside of excise taxes) rose by 2.8% to $7.9 billion, versus the Thomson Reuters consensus of $8.03 billion. That sales figure was higher if you back out items.

Cigarette shipment volume was up by 2.9%, excluding acquisitions. Philip Morris International said that its reported operating companies income was up by 9.5% to $3.3 billion, but this would have been up by 13% outside of currency and acquisitions. The company also repurchased 22.4 million shares of its common stock for $2.0 billion in the quarter.

The international tobacco giant, formerly part of Altria Group Inc. (NYSE: MO), is now issuing guidance for 2013 in a range of $5.68 to $5.78 per share at prevailing exchange rates, versus $5.17 (or $5.22 ex-currency) per share in 2012, which represents 10% to 12% adjusted earnings growth over 2012. This includes a one-year gross productivity and cost savings target for 2013 of approximately $300 million, but it also includes a share repurchase target amount for 2013 of $6.0 billion. The current Thomson Reuters estimate is $5.79 in earnings per share.

This report sounds very mixed on the surface, and that seems to be as a result of the extraordinary items. Shares are currently trading up 0.5% at $88.12, against a 52-week range of $77.84 to $94.13. The consensus analyst target from Thomson Reuters before this report was almost $97 for a year out.