4. The Inflation and Deflation Boogeyman

Inflation in America is elusive at this time, and it is also one of those double-edged swords: Not enough inflation brings little opportunity, but too much inflation erodes buying power for those on set salaries and fixed budgets. The Fed wants 2.0% to 2.5% inflation, but it has been unable to get inflation. Even the 10-year Treasury does not yet yield 2.5%, even if it may get there again.

Then there is deflation, the true boogeyman. Falling prices lead to bad news all around because everything you own is worth less money each day, and everything you want to buy will be cheaper the next day. Deflation leads to falling wages, causes lower home and asset prices, and leaves nowhere to hide. Those trillions of dollars in quantitative easing and stimulus from the United States, Europe and Japan may have simply thwarted deflation rather than created all the hyperinflation so many were worried about.

The trend of producer prices — Producer Price Index (PPI) — has been even lower than CPI trends, which might lead consumer prices lower for the months ahead. If oil stays closer $60 or approachs $70 again, maybe the deflationary pressure will end. Again, the Fed does not buy oil and the Treasury cannot print it. 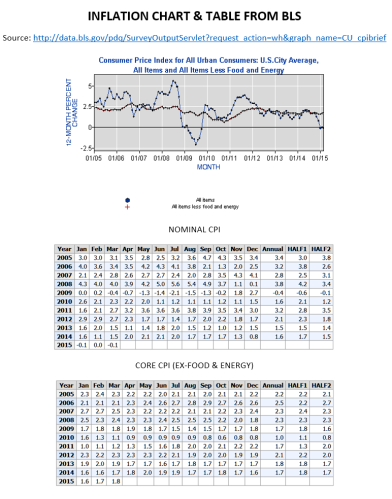