6 Big Companies That Severely Stung Shareholders This Past Week

Netflix Inc. (NASDAQ: NFLX) probably wishes that Carl Icahn would have come out talking it up as a no-brainer or something this week. The company’s earnings report came with a big disappointment in the overall subscriber growth, which was the real culprit.

Analysts were less than optimistic on the news in general, and Netflix shares traded down again on Friday and ended the week at $98.99. This was a $113.45 stock before earnings, and it was briefly above $115.00 early in the week. For rounding, let’s just call that a 15% loss for a tally of almost 45 billion in market cap lost.

This one may be getting hosed in the Dell acquisition of EMC Corp. (NYSE: EMC). By creating a tracking stock, and with the possibility of the combined Dell/EMC unloading more shares of VMware Inc. (NYSE: VMW), the end outcome is a diluted and larger share float of VMware.

The leader of virtualization and a dominant cloud player has won from a share scarcity in recent years. Now that share scarcity could (while not yet definite) disappear. Our view at the time was that VMware was the only solid growth engine at EMC, and now it feels like it is being put in the steerage section of the ship.

VMware shares were at $82.00 in the middle of the prior week, before the news of a VMware tracking stock might be part of a Dell-EMC merger. They closed out the Friday before the merger confirmation at $78.65, and they went as low as about $67.50, before closing $69.62 on Friday. That is still a loss of more than 17% from peak to trough before it recovered, and VMware is worth just over $29 billion.

Wal-Mart Stores Inc. (NYSE: WMT) went from a value stock to a value trap this past week. The company said at its investor day that it now expects a sharp drop in earnings per share for 2016. Some 75% of that blame is put on high wages, despite a much needed capital spending increase and a strong dollar impact. Wal-Mart shares dropped 10% on the news and had their worst one-day reaction we have seen in many years.

To make this really stand out: Wal-Mart’s $20 billion share buyback announced just doesn’t matter at this point, because that is almost exactly how much market cap the company lost on its announcement. Wal-Mart’s news was so bad that it hurt just about anything and everything tied to retail where wages may be a serious issue ahead. It has been a long time since Wal-Mart shares were under $60.00, not since May of 2012.

A group of charts below has been provided using StockCharts.com for a Candle Glance as of Friday afternoon shortly before the closing bell. The montage includes the Dow, S&P 500, Nasdaq, Alcoa, Eli Lilly, GoPro, Netflix, VMware and Wal-Mart, and it is a two-month chart performance with 20-day and 50-day moving averages included. 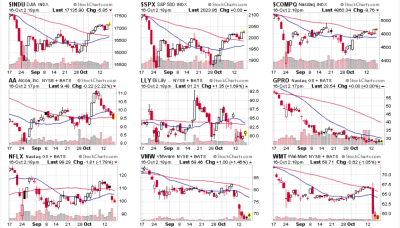