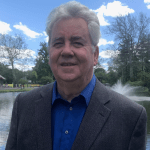 John then shifted to the Daily Journal in Elizabeth, New Jersey, covering scholastic, college, and professional sports news. The college assignments included Rutgers University football and basketball and Seton Hall University basketball. Professional work included covering the 1981 World Series between the Yankees and Dodgers; the New York Giants beat; and the soccer team the New York Cosmos. It was on the Daily Journal that John learned to design news pages and oversaw the daily production of the sports section. John eventually switched to news and edited copy as an overnight editor.

After working at the Daily Journal for six years, John moved to the Asbury Park Press, the third-largest newspaper in New Jersey. John copy edited general news stories and copy edited and designed the daily and Sunday business sections for five years, a period of substantial population growth at the Jersey Shore.

John then worked at Crain’s New York Business, a weekly business news publication, for eight years as a copy editor and later became assistant managing editor, overseeing the publication’s signature list content as well as content on the web. John was part of a team that won the Gerald W. Loeb award for excellence in business journalism.

John returned to New Jersey to become business editor for three years of the Home News Tribune, a newspaper in central New Jersey, overseeing a staff of four reporters who covered finance, telecommunications and the pharmaceutical industry. Among the initiatives John conceived and oversaw was a project on the oldest continuously operating business in each town in the newspaper’s coverage area.

John joined Bloomberg News, one of the world’s largest financial news organizations, and over a three-year period was an editor on the stock market team, overseeing coverage of the Canadian market, and was also an editor on the retail team.

John returned to newspapers in 2006, and was assistant business editor of The Record of Bergen County, the second-biggest newspaper in New Jersey, for 10 years. John supervised coverage of retail, commercial real estate, banking and finance, and small business.

Each of the 50 states that comprise the United States of America has its own shape. How their shapes were determined provides insight into how the United States became a nation like no other. 24/7...
John Harrington, Grant Suneson
20 hours ago

Most Covered Songs in Music History

A cover version is a new performance of a song originally recorded by somebody else. When an artist covers a song made famous by another performer, it is an homage to the song and the songwriter. Far...
John Harrington
1 day ago

Americans are gradually returning to the nation’s roadways, after the pandemic had suppressed travel. Gas prices have followed suit. Drivers now pay an average of $3.31 per gallon, according to...
John Harrington
2 days ago
Last Updated: 2 days ago

If 2020 was the year for country artists to hunker down and try to avoid the pandemic, 2021 was the year to recover. After taking advantage of time off the road to craft new songs and develop...
John Harrington
2 days ago

50 Hardest Law Schools to Get Into

Lawyers are sometimes portrayed as among the most despised professionals in our society. However, the law has an impact on virtually every part of daily life, and having a legal background opens up...
John Harrington
3 days ago

You can practically glean the history of America in the names of all 50 states. The story of the United States begins in the East and the South and is reflected in the origin of the names of the...
John Harrington
3 days ago

Secret societies have captured the imagination of the public for centuries. Many of these groups are thought to be ancient, mysterious gatherings of powerful men who get together and tip the balance...
John Harrington, Grant Suneson
3 days ago

This Is the Longest-Lived Empire in History

Homo sapiens began to appear about 300,000 years ago. It was only about 10,000 years ago, however, that humans began to build permanent settlements, the Smithsonian explains. The first civilizations...
John Harrington, Douglas A. McIntyre
5 days ago

30 Special Skills You Need to Become an Astronaut

Do you have the right stuff to be an astronaut? Becoming an astronaut is harder than getting into an Ivy League school. Only few have ever been selected by NASA. In 2016, more than 18,300 people...
John Harrington
5 days ago

Martin Luther King Jr. and 49 Other Most Important Civil Rights Leaders of the 20th Century

The 20th century witnessed great changes around the world — socially, politically, and economically. While many of the seismic shifts worldwide involved people throwing off the yoke of...
John Harrington
6 days ago

The Most Important Moments of the Civil Rights Movement

The quest for racial equality and justice in the United States has been long and divisive. As we celebrate Martin Luther King Jr. Day on Jan. 17, 2022, 24/7 Tempo has created a list of the most...
John Harrington
6 days ago

The Most Popular Countries on CDC's Do Not Travel List

The world is in the throes of the latest COVID-19 variant, the fast-moving and highly transmissible omicron version of the coronavirus. The variant was first detected in South Africa in late November...
John Harrington
8 days ago

Scandals That Rocked the Sports World

Serbian tennis star Novak Djokovic is embroiled in an international incident after his visa was revoked by Australian authorities over alleged irregularities in his travel declaration form....
John Harrington
8 days ago

Whether it’s in motion pictures, sports, or the media, nothing is more capricious than fame. Frank Sinatra voiced that sentiment in the song “That’s Life,” when he sang, “You’re ridin’...
John Harrington
8 days ago

The Best Places to Buy Your First Home in 2022

Even as home prices galloped higher in 2021, the American dream of owning a place of their own became a reality for many Americans, including first-time homebuyers. Fueled by pandemic-induced low...
John Harrington
10 days ago
Get Our Free Investment Newsletter