Even though Michigan’s GDP grew by 2.3% in 2011 — more than all but five states — the state’s economy continued to struggle by many measures. Michigan’s unemployment rate was 10.3%, among the highest in the nation, though definitely an improvement from the year before when 12.7% of the workforce was unemployed. Additionally, between 2006 and 2011, the median home value in Michigan fell by 23% — only four other states saw larger decreases. As of last year, one in every 45 homes was in foreclosure, among the highest rates in the nation.

In fiscal 2010, Arkansas owed just under $1,500 per capita, one of the smallest amounts in the nation. That year, the state faced a budget shortfall equal to just 9.1% of its budget, lower than most other states. In fiscal 2011, Arkansas was one of just four states with no budget shortfall. Although the state’s finances were well handled, Arkansas remains poor compared to the rest of the U.S. The state has one of the highest poverty rates in the nation. And at only 83.8%, it also has one of the lowest percentages of adults with a high school diploma, more than two percentage points below the national rate. Despite strong finances, Moody’s cited “low wealth levels” as a factor in not awarding the state its highest credit rating.

Also Read: States with the Widest Gap Between the Rich and Poor

Between 2006 and 2011, Oklahoma’s median home value rose 19.2%, the fourth-highest increase in the country during that time. In fiscal 2010, Oklahoma had one of the nation’s largest pension gaps, with just 56% of pension liabilities funded. Earlier this year, the State Senate’s Minority Leader Sean Burrage told The Oklahoman that the state has cut education funding too deeply in recent years. Last year, 86.3% of Oklahoma’s adults had a high school diploma, slightly better than the 85.9% rate nationally.

Georgia was one of the 10 states given the highest credit rating by both Moody’s and the S&P, with Moody’s noting the state’s “conservative fiscal management, moderate debt burden and relatively well-funded pensions” as well as its “history of rapid reserve building” as reasons for the rating. The state had one of the nation’s larger budget shortfalls in fiscal 2011 and was also hit hard by the housing crisis. Between 2006 and 2011, the median home value declined by more than 6%, among the country’s largest declines. The impact of the housing crisis was still felt last year, when the state had one of the nation’s highest foreclosure rates, with 1 in every 37 homes in foreclosure.

In fiscal 2011, Maine had one of the nation’s largest budget shortfalls, equal to nearly 35% of its budget. The state is still slashing programs, including Medicaid, which accounted for the majority of the cuts in May’s budget-balancing bill. Maine’s residents do not earn as much as residents of other New England states. The state’s median household income was just $46,000, more than $15,000 below Massachusetts and Connecticut. Maine’s economic output has also lagged recently, with GDP contracting by 0.4% — a bigger decline than all but five states. 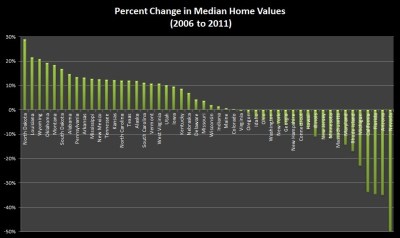 Connecticut had one of the nation’s highest median household incomes in 2011, more than $15,000 above the national median. The state is also a hub for high-paying financial jobs. The finance and insurance industry accounted for for 19.4% of GDP, more than nearly every other state. Few states, however, have a higher tax burden than Connecticut; state and local taxes reached 12.8% of income in fiscal 2010. Despite these tax payments, the state had a large budget shortfall in fiscal 2011 and again faces revenue shortfalls this year. The state has struggled with debt and owed the equivalent of 112.8% of its budget during fiscal 2010, the second-highest percentage in the nation.

Kentucky is one of the most-improved states on our list. When we first ranked the states in 2010, it was rated as the worst-run state in the country. Two years later, following our inclusion of GDP growth rate, tax burden, and exports, it has jumped 13 slots. While the state is not in the top ten in any of the new measures, it ranks average or above average for much of the new data considered. According to the Courier-Journal, tax revenues have risen 2.1% in the first quarter of the 2012-2013 fiscal year from last year. In 2011, the state had one of the lowest foreclosure rates in the country, the tenth-lowest violent crime rate, and a relatively minor budget shortfall of just 9.1%. Despite these positives, residents of the state continue to face some serious obstacles. In 2011, close to one in five Kentucky residents, or 19.1% of its population, were living below the poverty line. This was one of the highest rates in the country. Median income in the state last year was lower than all but three states — more than $9,000 less than the U.S. median.

With a median household income of $61,821, more than $10,000 over the national median, Hawaii was one of America’s highest-earning states in 2011. Last year, Hawaii had proportionally fewer residents without health insurance than almost every other state. Still, the state did have significant economic and financial troubles. Hawaii’s economy contracted by 0.2%, making it one of just six states to have GDP shrink in 2011. Hawaii also exported less per capita than any other state. The state also depended on the government for economic growth — government spending accounted for a larger percentage of GDP than in any other state. Also, according to the Council for Community and Economic research, the cost of living in Hawaii was 170% that of the U.S. as a whole, more than any other state.

New York’s 2012 ranking was weakened by a per capita debt of $6,694, one of the highest in the country. State coffers were boosted in part by fines collected from financial institutions, including a fine of $340 million levied on Standard Chartered, the largest fine ever collected by a single regulator, and $150 million fine levied against ING. But changes to Wall Street compensation could work against the state budget. The state comptroller predicts that bonuses will fall by 14% in 2012 compared to the prior year, while banks are offering more deferred compensation, which can’t be taxed immediately. Given that taxes on Wall Street employees’ income and real estate deals counted for nearly 14% of the state’s total tax revenue in 2011, trying times for Wall Street bankers could mean problems ahead for New York’s budget.

Last year, Mississippi had the nation’s lowest median income. At just under $37,000, it was more than $13,500 below the national median income. Along with that distinction, no state had a higher poverty rate than Mississippi’s 22.6%, which was double the rate of six states. Mississippi has also fallen behind the rest of the nation in recovering from the financial crisis. The state’s GDP shrank by 0.8% in 2011, the second largest decline in the country, and 10.7% of the state’s workforce was unemployed, the fourth-highest figure in the U.S. According to The Commercial Appeal, there are currently as many residents employed as in the mid-1990s, though the state’s population has risen from 2.7 million to nearly 3 million.