3. The Unofficial Fed-Treasury Conflict of Interest

The Fed now holds over $4 trillion in debt assets of the U.S. government’s Treasury securities, agency debt and mortgages combined. If the Fed raises rates too fast, in theory it hurts that value of the paper it owns, even if it can reinvest principal and interest at higher rates.

Also, if the Fed raises rates it drives up borrowing costs for the Treasury through time. The official debt to the penny (see below) was last shown as $18.1 trillion in total, so a theoretical 1% unilateral rise in interest rates would ultimately add another $181 billion in annual debt servicing costs, if you tallied all the debt truly as Federal direct obligation debt.

That extra $181 billion per year figure of course would take years to occur as the existing fixed coupon rates do not change, but this is still serious money to consider several years out.

The average fixed interest rate being paid on that debt was 2.363% in April 2015, versus 2.424% a year earlier, and total non-marketable average interest rates were 3.191% as of April 2015, versus 3.378% a year earlier. It may seem blasphemous to some to ask if there is a conflict of interest here, but it may be far less conspiracy theory if you consider what is in the interest of the nation. 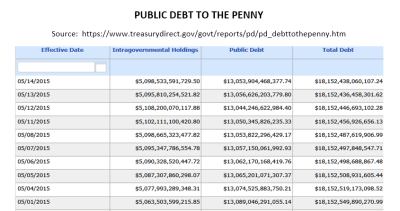 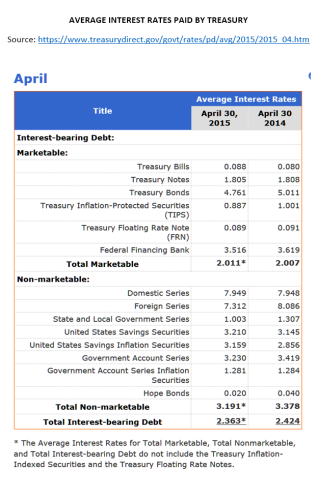